What is a Shaman?

If you speak to native elders and healers, they are likely to resent the name 'shaman' because the word largely misrepresents what it purports to mean.

I want to correct that perception. 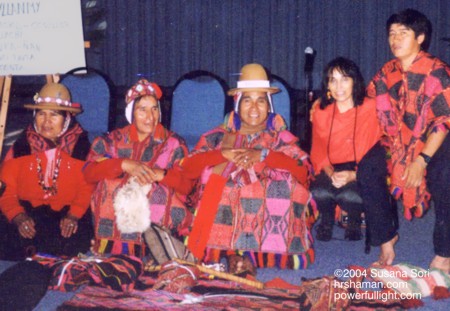 The Shamanism of the East and West

When you begin to delve more deeply into the healing and wisdom paths of various native traditions, you begin to realize that each represents a focused area of a much larger picture that overlaps the practices of yoga, eastern and western mysticism, and spiritual traditions.

In one way or another the path of shamanism pervades all of the great religions and spiritual paths, because it works with energy. It is at the energetic level where our deeper wounds are hidden and continue to form our destiny. Ultimately along any of the true paths, this level must be crossed and the wounds released because we are all energy beings, beings out of Spirit.

The word shaman became associated with what early Western anthropologists saw native healers doing in Siberia, Mongolia, and the Turkic peoples around the sixteenth and seventeenth centuries.

It was a time the world was caught up in empire-building and religious conquest. Conquered populations were being 'saved' and recultured with prejudice resulting in the decimation of native cultures, peoples, and knowledge, especially in the Americas.

This was the foundation for our formative misunderstanding of native spiritual and healing practices that were often relegated to superstition, trances, and fakery. The term shaman expanded to include native healers, jungle sorcerers, medicine men, midwives, herbalists, tribal elders, etc. But the idea that it involved summoning and channeling nature spirits stuck, and much of academia largely relegated it to a kind of intercession stagecraft with altered states or ritual.

Before the Mongol invasions of the thirteenth century and Russian invasion that followed, the vast expanse we refer to as Si-beria was originally called Siv-viria, (the land of) faith (viria) in Shiva (siv).

Many thousands of years ago, Shaivism, and Sanskrit extended from India to the arctic circle. That is why the ancient cities along that expanse, like Troy in Turkey or Bagdad in Iran, for example, are Sanskrit derivatives. It is the core basis of the Slavic languages.

Mellenia later, the Tibetan empire expanded into the region, bringing with it the Bon religion. We still have words from that time, like, bon-fire or the French word for sweets, bon-bon. The famous Shaman and later Tibetan Buddhist master Milarepa had his beginnings in the shamanism of the Bon tradition. There is an interconnection. The Q'ero of the Andes have always claimed a very ancient link to the Bon.

A new label on an older word

When we look a little deeper, we find that the word shaman was in wide local use to describe an ascetic, spiritual person, or a Buddhist monk, from the Sanskrit 'sraman(a)', and 'sha men' in Chinese that meant the same thing. Even a priest for the Ural-Altaic peoples was called a shaman.

In reality, the term shaman was already in established use; to describe someone on the spiritual path that had attained some mastery and respect.

One way of looking at what a shaman is or does is that a shaman acts out of their deep connection to Spirit, their own inner knowing, their own deep stance in what is, and what is perceived by being in the moment, rather than what one has been taught to believe and see.

It is the ability to be in the present moment, and thus more connected to Spirit, that is the real tool of the shaman. That tool has been honed through the shaman's own healing and reestablishment in that inner connection. And it is in the present moment, in reconnection to Spirit, that true healing takes place. That is the secret behind fire ceremonies, rites, and rituals that bring us closer to that state.

The word shaman and shamanism has been used indiscriminately and taken on so many projections, that it continues to dilute our understanding of the great gifts that native populations have preserved. .

Just as there are many different religions and spiritual paths, there are many shamanic paths. When we lump them all together, we see none of them except our illusions.

Our healing practice is established in the Laika tradition of the high Andes of Peru. We use the term shamanic practitioners or energy medicine practitioners because we work with energy rooted in several traditions. Shamanic coaching follows the same premise because all of our coaching has included the level of energy and Soul clearing all along. We are not sorcerers. We are healers who help our clients release their shadows. We don't do hexes, we do healing.

All of us have moved into a time of great change and uncertainty. The native peoples have prophesized this. We are grateful to the holders of the Laika tradition of the Q'ero people. Through centuries of sacrifice in isolation from western conquest, they were able to preserve and offer the ancient knowledge of their peoples for this time.